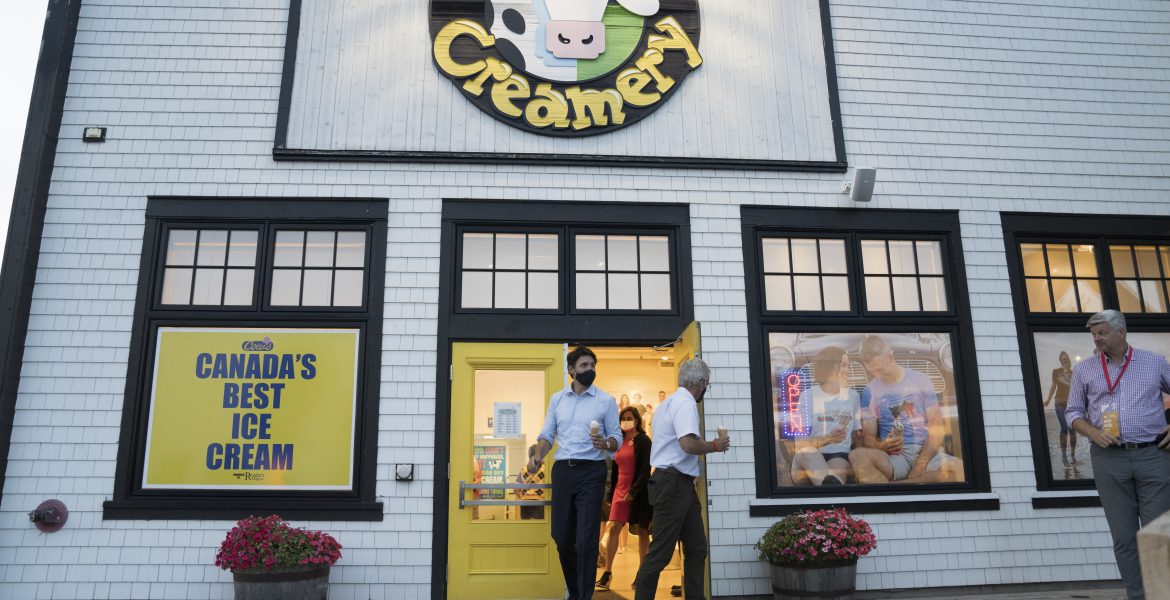 I had been somewhere near Fredericton, New Brunswick listening to some podcast on how an election was anticipated when Reuters photo editor in charge of North America Chris Helgren called giving me a heads-up that an election call was coming on Sunday.

Chris is nothing short of amazing. He has kept all the photographers on his team informed of advisories and safety precautions of anything pandemic-related. Something no other outlet would be able to match. It shows he cares.

Fast forward to August 22nd. Justin Trudeau was visiting Prince Edward Island. I had gotten the headsup by multiple people prior to the media announcement so I knew it was coming.

I was also excited. The prime minister’s photographer, Adam Scotti, was someone I spoke with about switching to Sony. He was still using Canon at the time. Additionally, photographer Sean Kilpatrick from The Canadian Press would also visiting with the Prime Minister. Both are top-notch guys.

In this case, Sean is technically a competitor as he is a photographer for The Canadian Press and I was covering it for Reuters. Both The Canadian Press and Reuters have the same clients but they also have exclusive clients. It’s a competition in the sense you want the media outlets to select your image over the next guys so coming up with something creative is important.

Some photographers are extremely competitive. They don’t want you to get the “shot” meanwhile others like Sean & Adam are the opposite. During the 2019 election, there was a stop in Truro where things were tight. By tight I mean there was 1 good photographers position yet there were 3 photographers. Adam or Sean could have sat in that spot and hogged it but no, Adam shot first, then Sean and then me. We rotated around each other to make sure each got the “shot”.

Justin Trudeau was visiting Cornwall first, then was going to go to Cows on the North River causeway.

Awaiting the arrival in Cornwall

I arrived behind Heath Macdonald’s campaign headquarters. I checked in with the local liberal team who then forward you to the RCMP. This check-in process usually involves a police dog smelling your gear before you can get within reaching distance of the Prime Minister and the media accreditation team approving your access. After all, it is the prime minister.

Adding the previous video of RCMP dog in 2019 election:

This is Tech (dog) and his RCMP handler Sgt. Michel Litalien at an event prior to @JustinTrudeau’s arrival. Tech’s done 6 years service with @RCMPNB and this awesome dogs last day of keeping the public safe was on Monday. pic.twitter.com/OXeJPGsFp8

After having my gear gone over by the RCMP, I was good to go. It was just a matter of waiting for the Liberal media team to arrive to get clearance from them. A short time later, the media bus arrives. Sean jumps off showcasing all his new Sony gear that he was now utilizing. He was previously using Nikon’s. We talked shop for a bit and both came. to the consensus, we love the Sony gear.

A few minutes later, Terry Guillon pops over and immediately recognizes me. He lets the RCMP know I am approved. I now had full access to cover the event from any angle/anywhere.

Awaiting the prime minister, his bus arrives. Adam Scotti jumps off the bus and we end up talking about the gear he is using for the election (he is not allowed to use government-owned gear during said election).

After chatting with Adam Scotti for a few minutes, the door to the bus re-opens. It was go time.

As per most events, the prime minister gets up, gives a speech, and wanders through the crowd. Shaking hands and kissing babies. Oh wait, it’s a pandemic. So scratch that kissing babies part.

From here, it was onto the Cows creamery in the riding of Charlottetown.