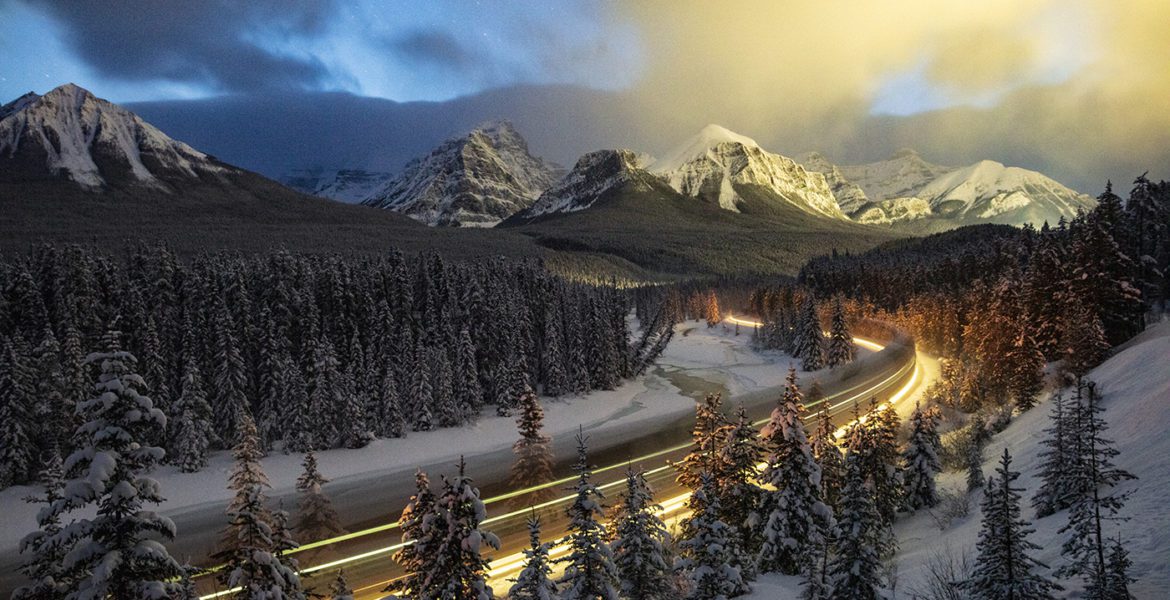 An iconic Canadian photography hotspot is Morant’s Curve near Lake Louise in Alberta. Nicholas Morant created some iconic images for Canadian Pacific Railways as well as the Canadian Mint for a couple of denomination bills. One of his most popular was taken at Morant’s Curve in Alberta.

Morant’s Curve is located at the same exit as Lake Louise however you turn the opposite way of Lake Louise at the on-ramp, head up the hill and take your first right. As we were heading down this road, Alyssa commented that there were no other vehicles around or heading this way. This changed when we arrived and there was 8-10 people there.

Trains frequent the popular photography spot heading towards Banff at a maximum of 4 times per hour or once every 15 minutes. This is controlled by their control markers where we sat and timed nearby in Field, BC.

As freight train’s do not have a public schedule, they can be difficult to predict. Our first visit, we waited 45 minutes without seeing anything other than a truck drive along the rail before heading onto Lake Louise, which the train passed as we drove over the bridge into Lake Louise. Our second visit, the same day, we waited 3 hours and it was plenty dark by the time the train came by. Our third visit we waited about 15 minutes till the first train arrived. Our fourth, we arrived seconds before the train did, since we had been chasing it.

Traffic is usually busier in the mornings as they work with freight companies to deliver the goods to market.

VIA Rail does have a public schedule but their trains are less dramatic and smaller than a freight train.

The weather has a key role to play for this Morant’s Curve. A little bit of weather can cover up the mountains which causes a less dramatic effect as seen in the below photo.

I have never been, but a good polarizer on a sunny day would make this spot amazing and pop! I will update this page when I do get such a shot.

Down the street from Morant’s Curve is another epic spot. We have visited it a couple times on this trip but haven’t visited it on a clear day yet. Here’s a preview: